This is a very brief history in which I hope to give you an insight of how this family firm came about and what we have achieved. It all started with my Great, 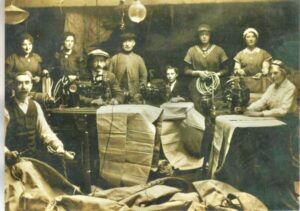 Great, Great, Great Grandfather who was a fisherman based in Great Yarmouth, Norfolk. He was not a very good fisherman so when his sails wore out he couldn’t afford to buy a new suit. His only option was to make his own.

It was not until he was regularly the first fisherman back to port did he realise that he had made his sails with the panels running in the wrong direction, according to thinking at the time. His fellow fisherman realised the potential of his sails because in those days the first smack back to land would command the highest price for their freshest catch. He was bright enough to realise that making sails in a draughty shed was actually a better and safer way of earning a living than fishing in the cold waters of the North Sea. So in 1832 Jeckells the Sailmakers was born.

Jeckells continued to service the fishing fleets of Lowestoft and Great Yarmouth until the early 1900’s. By then smacks had started to decline but the pleasure sailing craft of the Norfolk Broads started to increase. A workshop was opened in Wroxham, at the heart of the Broads. Initially the sail loft was just to repair the sails on Saturdays, which was the hire boats changeover day. All the new sails were made in Lowestoft, and as getting the sails to Wroxham was difficult and time consuming in the 1930’s. it became clear that it would be better to open a full workshop in Wroxham so in the mid 1930’s the main factory and head office moved to Wroxham.

With World War 2 on the horizon and Jeckells having a reputation to be able to sew anything, we got the job of making camouflage netting, gun covers and latrine screens for the services. After the War sailcloth technology moved on and so had transportation around the world. It was this combination that enabled us to grow internationally.

My Grandfather had a wooden box in the corner in his study of approximately 3’ by 3’ by 4’ high and every 3-4 months I was tasked with climbing into it. It would be full of letters and I was to check every envelope for mislaid cheques, (he was a canny old sod and would always leave one cheque in an envelope for me to find so that I did not lose interest!). I would then remove all of the foreign stamps so that we could give them to the local scouts or blind centre and it was truly amazing how many I would find.

We have developed many marine products though the years. My father became the first UK sailmaker to successfully fit a window into a sail, which was a great help as he was a keen racer and it stopped him from hitting people. He also designed the original Lazybones Cruising Chute, although there is some debate as to if it was my Great, Great, Great, Great Grandfather before him with the balloon jib in the late 1800 to early 1900’s.

We started using computers such as the Hewlett Packard desktop with small magnetic strip cards in the early to mid 1970’s. Research and development allowed us to aid our sail designers with computers in 1982. My father was a very knowledgeable sailmaker with a penchant for maths and geometry and wrote our own programmes.

When I started on the sailfloor my first job was the most boring thing I have ever done. I had to knock eyelets into little ditty bags; each bag had 8 (sometimes 9!) eyelets. After this my father made me work my way through every department so that I could learn about sails, their production and design. I remember being called into my father’s office in 1981 when he told me that computers were the way forward and that I was to learn how to use them. It was as a result of this that we introduced 3-D design software in the early 1980’s followed quickly by a laser robotic plotter.

We were one of the first lofts in the country, if not the first, to have a computer controlled laser cutter.  We went to see the tests for the first laser used in manufacturing, which cut regular sized holes in the teats for baby’s bottles. Our initial thoughts were for using the laser not to just cut sails but to stitch sails instead of using thread but the resultant molten sailcloth was too brittle. Our laser cutter was a great advance, as the laser would cut to 0.01 of a mm and heat seal each cut to prevent fraying, it also reduced the amount of space required to make a sail.

I have been involved with pioneering various design projects and these have included the Tiki zip rig on for the Wharram Range of catamarans to supplying a snuffer at a realistic price. The original snuffer came to the UK in the early 1980’s for about £230.00, which was an awful lot of money back then. I knew that I could come up with a cheaper alternative that would work equally as well. The prototype was a bucket with the bottom cut out and sewn onto a nylon tube. We modified the design to have a canvas funnel instead of a bucket and advertised it at the Earls Court boat show for £29.99 including VAT for a boat up to 28’0”. We expected to sell a small handful if we were lucky, however we sold over 100 over the show, and even more surprisingly there was a good margin in them.

We moved into our purpose built Sail loft in 2004 which, combined with our raised floor, new sewing machines and skilled staff has enabled us to produce a perfect sail every time. Today we make very high quality performance cruising sails with a 5-year guarantee (again something that Jeckells was the first to introduce).

We have expanded into many other areas including deck up packages, full rigging service and of course our sail valeting and “within the week” sail repair service. We can collect a sail from anywhere within the UK on a Tuesday and guarantee to have the sail back by the weekend.

We also supply the Sailtainer in boom reefing system and the market leading headsail reefing systems. Jeckells currently have 15 UK and 4 European Agents which ensures this local Norfolk company can offer a local service to many more.

I hope that this gives you an idea of why I am so passionate about my company, staff and goods.